Rush Limbaugh, love him or hate him you know about him. He has been master of self-promotion and leveraging people and events to further, well, him. He is currently in hot water due to some comments I won’t repeat here, but you can read the story here. Self-promotion. It is a doubled edged sword. How much is too much? Is there too much? 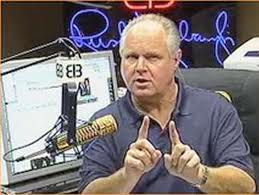 So if we break down the issue, Rush Limbaugh’s problem was not so much what he said, but that Rush made it personal about someone. Most people who are convicted for stock and securities issues are actually convicted for lying. Rush Limbaugh is being convicted in the court of public opinion because he did not rectify the issue immediately and to the injured parties’ satisfaction. How often do we fail to do that, even with non-social media issues?

I’m a firm believer in sharing. I have one public identity on many different platforms.  Facebook, LinkedIn, Google+, Twitter, I even Blog ;-). I rarely post to a small group of people, I make my comments public. I guess I am who I am.  The world is changing and it will be harder and harder to do business without a social presence.  So my guidelines?

Whether you do or not is a business decision, ask Rush Limbaugh how that is working out for him?
Posted by Steve Noel at 3:59 PM